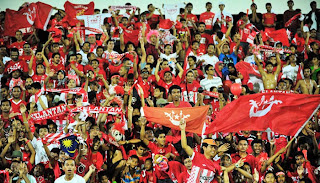 The Red Warriors are eager to draw first blood as that could motivate them to win the battle.

So says Kelantan coach M.Karathu would is gearing up his lads as they host Terengganu in the return leg of the Malaysia Cup quarter finals tomorrow. Terengganu won the earlier leg 3-1.

Terengganu fans too ought to be careful when visiting Kota Baru. They have already been warned that things could get ugly as seen here.

Scare tactics? Then again, remember their fans burning down a Black Maria?

With five red and 10 yellow cards flashed in the earlier clash, the return leg would be another exciting adventure. All the best to both teams.