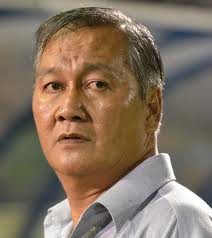 Irfan Bakti (pic) has never won the Malaysia Cup title as a coach.

And he believes this is his best opportunity to do so through Terengganu.

But Irfan is not getting carried away as he still respects the might of Selangor - despite the Red Giants having shown an unimpressive record in the number of shots at goals. Ask former Merah Kuning defender K.Gunalan and he will be able to give you the exact figures.

Read of Irfan's goal and the "satisfied" feeling he felt after defeating Kelantan in Kota Bharu in the quarterfinals match in today's Mailsport.

T-Team, meanwhile, are eager to brush aside Negri Sembilan.