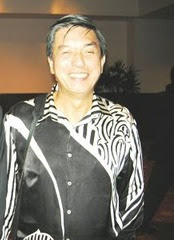 An advertisement was placed but judging by the looks of it, the BA of Malaysia (BAM) will resort to head hunting their candidate to fill the high performance director's post.

And judging by today's Mailsport, a respectable man from the National Sports Institute (NSI), Lt Col (R) Wong Ah Jit (pic) could be their man.

Ah Jit was approached on Friday but he insisted he will not quit NSI to help BAM.

Ah Jit is a no nonsense man with a proven track record. He did his wonders with the Squash Racquets Association of Malaysia, National Sports Council and now NSI. I'm sure he will be able to contribute to BAM.

And I'm sure BAM secretary Ng Chin Chai will speak about this during the Dengan Izin show with Rizal Hashim on Astro Arena which will be aired on Friday.

But here's a question, shouldn't BAM have directly approached their potential candidates before placing an advertisement?

And is the role suitable for Ah Jit?