The ball is in your court KLFA. 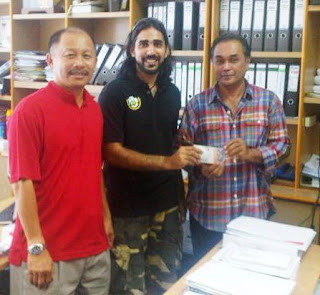 NOTE: The author is not linked to any member or official from KLFA and is not a representative of any party associated to KLFA.

UPDATE 2.21pm: Indonesia-based blog Jakarta Casual, in its posting Tough Times for KL, had this to say:

"It's a shame them Malaysians who own Queen's Park Rangers and Cardiff City can't do their bit for local football instead of sending their money overseas and grabbing cheap, meaningless headlines by asking the likes of Safee Sali and Safiq Rahim for pointless trials."

The fans have played their part.

Now it is up to KLFA to buck up and be serious in their quest to stay alive in the Super League.

I must thank those who attended the Save KLFA Campaign drive this morning, including MSL Sdn Bhd CEO Stuart Ramalingam, KL coach Razip Ismail and DuniaSukan's Faliq Firdaus.

A total of RM700 was collected. Not much, but it was a start.

The cash was immediately handed over to KLFA secretary Nokman Mustapha.

Nokman agreed KLFA will ensure the continuity of the campaign.

But here are the hard facts;

1. It took the Negeri Sembilan FA fan club to create the Save KLFA Campaign poster (which will now be seen on at least 48 taxis in the Klang Valley). The poster was also seen on the Kelantan FA fan club facebook page.

2. KLFA has a dozen officials and one wonders the amount of ideas they will be able to come up with if they all sat together and discussed about football. An idea was generated through the one hour campaign drive to initiate a jumbo / bundle sale during KL's matches.

3. KL will not be playing any of their home matches at the Cheras Stadium. Instead they will be playing in Malacca and will incur more costs (traveling). Was this given any thought?

4. Why is there a need for another party to initiate a website when it should have been done a long time ago? Is it true a particular official was tasked to create the website but never got down to doing it? How expensive can it be to start and operate a site as blogspot or wordpress and even twitter is free?

5. The city team may not play with a single foreign player next season. Rami Ayo Hassan's contract with Nigerian side Gombe United is still in question.

6. What happened to the KL Hawks supporters club which was created with much pomp and fare not too long ago?

7. How many officials were well aware of the campaign? What was their excuse for being ignorant? If they were internet savvy, they would have known about it.

If things do not change, KL would be playing in the Premier League next season. And they will only have themselves to blame.

HD says: It was fun while it lasted. Cheers!
football KLFA save klfa campaign