A Stadium that rocks. 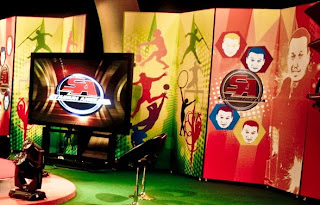 The topic discussed was about the introduction of foreigners in the M-League.

Hamidin pleaded that his committee be evaluated after they have completed their full term in 2014 and that fans understand changes are important to go forward.

Reduan, who was rather quiet throughout the show, hoped 2012 will be the turning point for Malaysian football - for the better. He also cautioned there are rumors of players being on the take and fixing matches even at the lower divisions.

Hamsani advised his peers that football bribery is "not worth it".

Wan Fakhrul summed his session up by saying there is no point of the Media hyping up about the teams if the fans do not play their part by heading to the stadiums and cheering on their teams from the start to the end of the season.

There is also the current debate of several players being axed from the list by FAM. Can you blame the national body for doing so after it has clearly stated the guidelines for hiring import players?

You know it is against the traffic regulations to beat the red light and you still do it. And when caught you expect some leniency?

There are also teams who insist they want to hire import players knowing very well they could run into financial problems. I've said this in Kafe Sukan last year and I'll say it again, if you can't afford a Ferrari, just buy a Kancil.

Spend within your means.

HD says: Stadium Angkasa seem to have interesting topics (except that I did see one of their studio audience 'sleeping' while the show was on). Here's hoping for an even better line up next year.
football Hamidin Amin hamsani ahmad M-League Reduan Abdullah