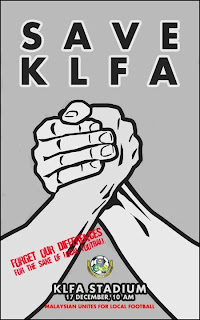 Almost every city in the world has a top class football club.

KL are only basking on their past glory in the 80s.

Some claim it was the then Lord Mayor Tan Sri Elyas Omar who had unintentionally spoilt KLFA by giving them generous funding and land.

Elyas's successors were not so generous and I don't blame them. After all City Hall money is collected from KL folks and thus it should go back to the city people. Not just one football team.

Not too long ago KLFA managed to get funding from chemicals giant Ancom Bhd but many were clueless towards what the money was splurged on.

Today KLFA are feeling the pinch for they learn not many companies are as generous as Ancom.

And the small but loyal fans are getting rather annoyed with this uncertainty.

It is not about the total amount that will be raised but the support towards KL. Dunia Sukan has jumped on the bandwagon as well, as seen in the posting 'Selamatkan Kuala Lumpur!'.

HD says: As per my previous posting, I will be there with my RM100.