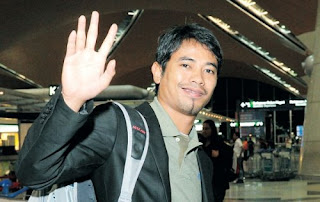 It is not easy for a Malaysian to play in the English Premier League.
It is not about the football standards alone but obtaining the work permit.
Safiq enjoyed a training stint with Wales club Cardiff City recently.
Yet, that has not stopped fresh speculation of national skipper Safiq Rahim playing for Queens Park Rangers next year.
According to EyeFootball.com;
"Tony (shouldn't it be Neil?) Warnock has been recommended Rahim by (Tony) Fernandes' representatives, and the player will arrive on trial in January to spend time with the first team."
But what caught my attention is the final paragraph of the article;
"Selangor value the midfielder at around 300,000 GBP but a trial period is expected prior to any permanent deal."
That's about RM1.4 million! No disrespect to Safiq but....biar benar wei?!?!
HD says: The above mentioned website seem to have placed a wrong picture. I'm a little skeptical over the report.
QPR Safiq Rahim Tony Fernandes