Bookies, players, you're being watched! 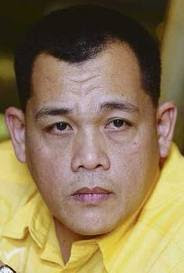 The FA of Malaysia (FAM) confirmed there have been on-going meetings and possible collaboration with their counterparts across the Causeway in a bid to weed out match-fixing for the 2012 M-League season.
FAM vice president Hamidin Amin (pic) acknowledged the meetings but declined comment.
This does not come as a surprise after a Singaporean bookie and a Malaysian coach was charged for match-fixing this year.
Singapore's LionsXII will play in the Super League next season while the Harimau Muda A lads will play in the Republic. A Cambodian team will also play in the FA Cup.
Meanwhile, the competition committee met at Wisma FAM yesterday and decided the following;
1. Incentives
- grants and incentives totalling to RM5,167,762.23 have been credited to the participating clubs and state teams on December 28.
- teams must prioritise their spending and ensure players are paid their wages, EPF, Socso and income taxes on time.
-distribution of prize money for 2012 season as follows:
Super League - 1st RM750,000; 2nd RM 450,000; 3rd RM 300,000
Premier League - 1st RM300,000; 2nd RM 150,000; 3rd RM 75,000
2. Ticket prices
FA Cup final - RM40
Malaysia Cup final - RM40
International matches - RM20 (friendlies and group stages); RM40 (semi final)
Sultan Ahmad Shah Cup - RM15 (open); RM30 (grandstand)
-minimum ticket price of RM10 stays including in Singapore. If states or teams decide to charge more, it is their prerogative. 10% levy will also be charge to all teams including LionsXII.
3. Referees
- match allowances for referees and match officials will be raised. No mention of new rates.
4. M-League 2013-2016
- Super League and Premier League will comprise of 12 teams each.
- Super League : top nine teams, LionsXII, champion of Premier League while final spot will be decided in a play off between the Premier League runners-up and the remaining Super League teams.
5. FA of Singapore (FAS)
- FAS will bear all cost when LionsXII host visiting teams in Singapore. This includes accommodation, food, transport and allowances for match officials.
6. Stadiums
- Stadiums that will host night matches (kick off 8.45pm): Utama Stadium, Darulaman Stadium, Perak Stadium, Mini USM Stadium Penang, Sultan Mohammad IV Stadium, MP Temerloh Stadium, PJ Stadium, Paroi Stadium, Pasir Gudang Stadium, Sarawak Stadium.
- Stadiums to host evening matches (kick off 4.45pm): City Stadium Penang, Batu Kawan Stadium Penang, Sultan Ismail Nasiruddin Shah Stadium, Selayang Stadium, Hang Tuah Stadium Malacca, Hang Jebat Stadium Malacca, Likas Stadium, Sabah.
- Stadium closed for renovation works: KLFA Stadium Cheras, Shah Alam Stadium, Larkin Stadium Johor and Darul Makmur Stadium Pahang.
7. Import players
- the competition committee agrees with the decision of the vetting committee that players who do not adhere to the regulations stipulated by FAM cannot compete in the M-League. Teams are able to sign up new import players in the second transfer window from April 2-16, 2012.
8. FA Cup
- The FA Cup curtain raiser will be between Perak and T-Team on Feb 17. The other teams will play their matches on Feb 18.
- Harimau Muda B will not participate in the FA Cup as they will compete in a competition in Singapore (Feb 17-21) followed by the Hassanal Bolkiah Cup in Brunei (Feb 25 - March 5). Replacing the Harimau team are Cambodian club Preach Khan Reach FC. Preach Khan were the FA Cup champions in Cambodia and were placed third in their league.
Responding to Kosmo article Kim Swee resah, FAM secretary general Lt Gen (Rtd) Azzudin Ahmad said;
"It is not ethical to ask FA of Singapore for the schedule so we will give them room to announce the fixtures. Even we are releasing the fixtures now, a few weeks ahead of the kick off and I'm sure FAS will do the same as well. After all, FAS has been running the S-League for many many years.
But if we still do not hear from them as the S-League kick off date commences, then we will ask."
HD says: Looking forward to the weekend.
fa singapore FAM football M-League