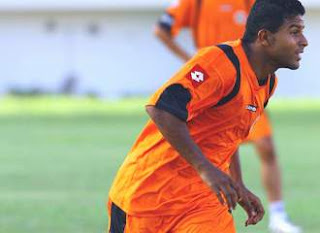 Before we continue with the debate of Malaysians playing in Europe, Foul! would like to extend our sincere condolences to Khairul Fahmi Che Mat and his family after his younger brother Amirul Izzat passed away yesterday.

Stanley Bernard Samuel is not an import player - as once published by a local daily.

He is a Puchong lad who started honing his football skills at the KLFA Academy and sent on to play for the city team followed by the now defunct MyTeam.

He then tried his luck and got a place with India's Sporting Clube de Goa. Some people claim the standards in India is not great after all but do remember their national team managed a 1-1 draw followed by a 3-2 win against K.Rajagobal's lads recently.

And Stanley has called on his fellow peers to forget about Europe and start conquering Asia instead. Look at the Middle Eastern teams, Japan and Korea.