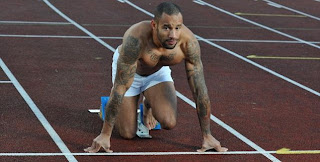 1" That's why sport in england is dying..google how much the cycling team is being funded n that will give an indication on how much the gov is spending...FYI..."

2 "@HareshDeol and with their current state of their economy it isn't their priority.Great time for malaysian sports to push hard n catch up!"

The sprinter has just completed his most successful season after four years of injury but has not received a single reply to the thousands of sponsorship emails he sent.

The 26-year-old, who ran the second-fastest 200 metres by a British athlete and represented Great Britain at the World Athletics Championships, has turned to eBay to get the backing he says is needed to take him to the next level.

That is the story of top UK athlete James Ellington (pic), as published in the major UK dailies including Metro.co.uk.

In Malaysia, athletes are housed, fed and even given allowances. Sports is their job.

Yet, they still don't produce the desired results. Some claim they are not paid enough!

Do our athletes deserve all the tax payers funding? Or shall we just ask the Sports Ministry to pump in money elsewhere and leave the athletes to fend for themselves.

Maybe the National Sports Associations will then be forced to scout for their own funds to aid its athletes.