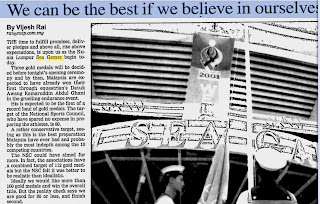 Just before the 2001 Sea Games, the National Sports Council (NSC) had then projected 80 gold medals.
It was considered too low, based on NST's report 'We can be the best if we believe in ourselves' (pic).
The article was published on September 8, 2001.
And the same was raised this year, as seen in Rizal Hashim's blog posting.
In 2001, Pritam Singh wrote this;
The FA of Malaysia (FAM) in reminding their affiliates not to repeat the mistakes of last season, have urged M-League teams not to compromise on the issue of salaries.
FAM deputy president Tengku Abdullah Sultan Ahmad Shah has advised the FAs, association affiliates and club sides to prepare their annual budgets carefully and set aside the right amount for salaries.
The article, titled FAM: Pay salaries on time was published on December 18, 2001 in The Malay Mail.
10 years on and the same happened this year where several players including those from KLFA were not paid their wages on time. The footballers are not surprised if the same will be seen next season.
Some things never change.
HD says: Same script, different actors.
FAM football medal target Sea Games