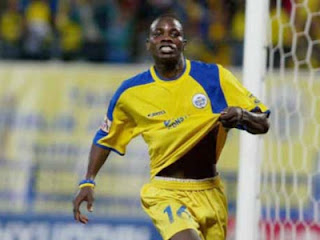 "Leaving without saying goodbye is low in my book and apart from coaching them football, I hope Yunus Alif will coach them some manners too."
Those were the words of Permai Hotel public relations manager Ruhana Abdullah.
Ouch!
T-Team latest imports Zambian striker Zacharia Simukonda (pic) and Bosnian defender Bojan Petric had apparently snubbed a Christmas dinner organised by the club, as published in today's New Straits Times.
Perhaps the players were "tired".
But turning their backs against the fans even before the season starts is not a good way to start a healthy relationship.
Both players now better prove their salt or they could very well suffer the wrath of the T-Team fans.
HD says: Public relations and engaging with the Media is key to the making or breaking of any individual, club and organisation.
Bojan Petric football Ruhana Abdullah t-team Zacharia Simunkonda