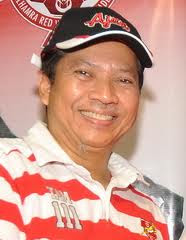 That was the headline in today's NST.

But given the current situation, it cannot be a reality.

Annuar is a man with many ideas and enjoys a healthy working relationship with those in MSL Sdn Bhd. Annuar has transformed Kelantan into a well run organisation and the only thing they need right now is a stadium of their own.

Things are different in FAM though.

This brings me back to the days Khairy Jamaluddin was in the same position and how he was shunned by many of the "old timers" for being vocal and wanting to adopt changes. He got fed up and chose not to run for election.

Even the other deputy president Tengku Mahkota Sultan Ahmad Shah would love to see changes. And despite being associated with good advisers including Windsor John Paul, he is struggling to implement a more professional set up.

So will Annuar's rebranding become a reality?

Only if the current batch of office bearers and given the boot and fresh faces are brought in. Individuals who are computer literate, know how to engage the Media and public alike and come up with plans that would actually benefit football as a whole and not their respective state FAs.

And for that to happen, the FAM constitution needs a serious overhaul. No officials running the state FAs should be part of FAM - especially in the disciplinary and competition committees. Serious conflict of interest there.

Till that happens, I would like to tell Annuar that there is no point being vocal or standing firm with your believes.

People will only hate your guts and take it personally. You've already been stabbed numerous times. So not worth it lah Tan Sri.

As a wise man once told me; "The one thing I have learnt in this business is to just shut the f*7k up."

And I guess that's what we must all strive to do.

HD says: Everyone is eager to rebrand.
Annuar Musa FA of Malaysia football