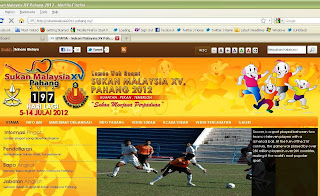 According to the recently launched official website, it is July 5-14, 2012.

But the Education Ministry (MoE) has not been informed of the dates.

The National Sports Council (NSC) claim the dates are not confirmed.

It is a problem to hold Sukma early July as it clashes with the 4th Asean Schools Games meet in Indonesia.

And MoE has made it very clear they want their best student athletes representing the country.

Word has it that the state sports councils are pissed while folks in MoE are not amused. Wouldn't all this be avoided if there was proper planning by all the parties concerned - including the Higher Education Ministry (for availability of university facilities).

The uncertainty will also disrupt the 2012 calender for the National Sports Associations.

HD says: Dilemma aside I must state on record my appreciation to NSC director of sports Abdul Jalil Abdullah for his time earlier. He certainly sets a better example compared to some of his peers and subordinates in NSC.
4th asean schools games abdul jalil abdullah sukma