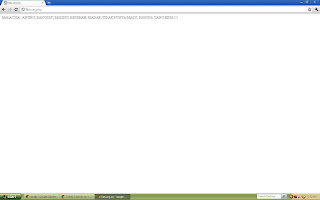 UPDATE 10.49pm: FAM website is up and running.
------
The FA of Malaysia (FAM) website has been hacked again!
This comes hardly two months after the website was defaced in late October as seen here.
There is only one sentence mocking the country as the whole web page is blank. It remains unclear what sparked the incident or who is responsible for the attack.
The Mole (www.mole.my) website was also hacked days ago.
Malaysia has been riding high since edging Indonesian twice on home soil at the Sea Games in Jakarta but lost their two other matches in the run up for the London 2012 Olympics. The Olympic squad is currently in Australia where they beat Sydney FC 3-0 and will play Central Coast Mariners next.
HD says: Kena hack lagi. Waduh!
FAM hacked Mole