LCW player of the year, Koo-Tan smashed out 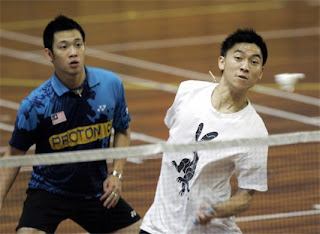 That is the contrasting tales of world No 1 Lee Chong Wei and team mates men's doubles pair Koo Kean Keat-Tan Boon Heong.
The Star's Rajes Paul, who is covering the Super Series Masters Finals in LiuZhou, China said;
Malaysia’s top pair Koo Kien Keat-Tan Boon Heong played one of their best matches in recent times but still went down to South Koreans Lee Yong-dae-Jung Jae-sung 21-18, 15-21, 18-21 in 61 minutes in their Group B opener.
Chong Wei, meanwhile, defeated Japan's Sho Sasaki 21-11, 18-21, 21-12 after he was named BWF World Player of the Year.
Satwant Singh Dhaliwal, in his twitter yesterday said:
Koo/Tan lost to Koreans 21-18, 15-21,18-21. 3 coaches cannot help them win. Jae-sung competes despite an injured playing arm.
The doubles pair have only won the Malaysian Open GP Gold this year. Perhaps the tight schedule is taking a toll on the players who have slipped down the BWF standings.
Will lack of mental strength be used as an excuse again? Or is it high time for Koo and Tan to go their separate ways?
Or have Koo and Tan reached their peak that we should not expect much from them anymore.
This is a question only Koo and Tan can answer.
HD says: I still believe Koo and Tan have the fire to get them going. It's all about fueling them up right.
badminton koo kean keat koo kien keat tan boon heong Lee Chong Wei