Contractors at the mercy of workers 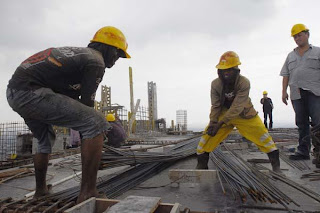 My closest encounter of being in the construction line was undergoing industrial training at a construction site in Kepong while pursuing my education in civil engineering.
The six months training was an eye opener, from witnessing how workers catch a monitor lizard for their dinner to the Immigration Department raiding the site to nab illegal workers.
While still in the midst of celebrating the Lunar New Year, I spoke to some contractors about the latest in the scene.
We spoke about new technologies but most importantly why construction work - from developing a house to refurbishing homes - is becoming expensive.
"The high costs of materials is just one of the factor. But then again, most accessories and parts (taps, basins, storage tanks) are made in China so the prices are still OK," said a contractor.
"The problem is the foreign workers-lah. They are holding us at ransom. They dictate their wages and are arrogant enough to tell us if we can't pay them, they will go elsewhere."
Apparently, there will be a 'leader' of the pack that will deal with the contractor. The contractor is not allowed to find his workers but the 'leader' will scout for the workers instead. The 'leader' or better known as 'kepala' will then take a cut from each worker he finds.
Contractors have no choice but to allow this to happen as they are rushing for jobs especially months prior the Chinese New Year celebrations. These contractors claim their profit margin is rather low compared to their counterparts 10 years ago.
So it comes to no surprise that a standard sized plastic storage tank costs about RM300 but the workmanship to install the tank above your house is about RM400.
I'm all for better working conditions and terms (insurance, better wages) for the workers, especially legal workers but it should come with better end results and not to the extend of holding us Malaysians at ransom.
HD says: Boy, oh boy.
contractor Malaysia