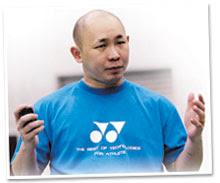 First it was Razif Sidek.
Then it was Wong Ah Jit.
Now it is another former international Yap Kim Hock.
The three possible candidates will join Cheah Soon Kit and Kwan Yoke Meng for an interview session for the High Performance Director post at the BA of Malaysia.
Razif, Kim Hock and Soon Kit are former internationals but it doesn't guarantee that they would make good administrators.
BAM were eyeing for Ah Jit and Yoke Meng as they are known for their management skills but certainly lack the badminton depth as seen in the three names mentioned above.
But here's the question...what exactly is the role of the High Performance Director?
Is it an administration job or one who charts the programmes of the players. It is two different things that require two different set of skills.
But according to the job requirement as advertised in several local dailies in November 2011, there is no mention about the need to have playing experience.
There is also the question of ego. Will a former international 'report directly' to an administrator of the national body?
Oh well..
HD says: Here's hoping BAM chooses the right candidate for the job.
badminton high performance director