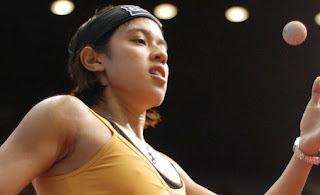 Squash queen Nicol David (pic) made it a memorable weekend for Malaysian sports after she won the World Series Finals in London yesterday.
Nicol defeated Irish lass Madeline Perry 11-9, 11-9, 11-9 in the final.
Earlier, he fellow state athlete Lee Chong Wei had won the Korea Open Super Series men's singles title.
This is Nicol's 57th Wispa title. With a perfect start to the year, the Penangite is expected to nail a whole lot of titles this year.
Athletes like Nicol and Chong Wei do not come by every day. They are exceptional so it will be unfair to expect a similar pedigree of athletes any time soon.
However, it is instrumental to narrow the gap between such athletes and their peers. We need both the quality and quantity of good athletes especially during major tournaments.
Perhaps there is a need of organising more local tournaments to ensure the masses are well represented.
HD says: Well done Nicol.
nicol david squash