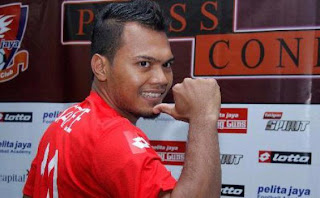 The FA of Malaysia (FAM) are willing to make exceptions if national hitman Safee Sali (pic) wishes to return to Malaysia once his contract with Pelita Jaya FC expires on Jan 31.

This include allowing Safee to sign up with any M-League team despite the registration date has passed.

The situation in Indonesia remains messy and if nothing is being done to solve the matter, then Safee should ditch plans of playing in the Republic and ply his trade elsewhere.

FAM vice-president Hamidin Amin even said that his former team Selangor are ever willing to snap him up and there are many other teams in the M-League that could use his services.

Meanwhile, Sports Ministry Ahmad Shabery Cheek wore a frustrated look and took a swipe at the Malaysian Athletics Union and the Malaysian Weightlifting Federation for their inaction over the doping fiasco at the Indonesia Sea Games.

Two national athletes - one from the 4x400m men's relay gold medal team and the other a weightlifter - were found positive with banned substances but the national associations kept mum over the matter.

"I am very sad this has happened and it is something we cannot tolerate. To have to return the gold medal after all the publicity that they received is shameful."