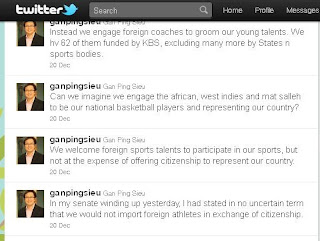 One can construe this as a "big boost".

But others might say this as an act of desperation.

The Star had today reported former top Chinese diver Huang Qiang obtained the go-ahead to represent his adopted country for the London Olympics.

Many believe the nation has a shot of winning its first Olympic gold medal this year.

Huang, 30, is a coach and settled down with a Malaysian two years ago.

We have had "foreign" talents in the past - in the form of China-born walker Yuan Yufang and Russian shooter Irina Maharani representing the country.

Singapore welcomes foreign talents and offer them citizenship as seen in their table tennis and badminton players.

But not too long ago deputy Sports Minister Gan Ping Siew said this on his twitter (pic);

We welcome foreign sports talents to participate in our sports, but not at the expense of offering citizenship to represent our country.