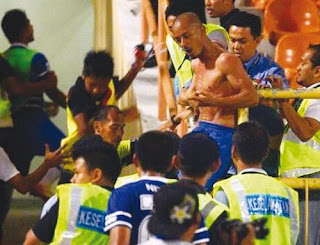 The Malay Mail undergoes ANOTHER relaunch.

That aside, Felda United player Hardi Jaafar (pic) is no stranger to the domestic and international scene.

I have always enjoyed speaking to Hardi for he is among the few footballers who are able to give their thoughts - diplomatically or otherwise - without hesitation.

So it was a pleasant surprise when I received a phone call from Hardi on Saturday. Hardi said he was tired of Felda being bashed and mocked after their clash against Negri Sembilan. The Negri team won 1-0 at the Paroi Stadium.

There were claims that Hardi was subject to foul language and was spat at. Rumours around the stand has it that the person who threw the bottle at Felda's goalkeeper Hamsani Ahmad was close to the Negri Sembilan Menteri Besar.

They are after all rumours.

Below is Hardi's take as published in today's Mailsport. Note, while Hardi has apologised on many platforms including on his facebook page and on Era FM, it is his comments toward the import players that leaves a sting.


“IT WAS a tensed match involving our team (Felda United) and Negri Sembilan. Typically, after every match I would shake the hands of every player. What happens during the 90 minutes stays on the pitch and I don’t hold grudges.

Sadly, that wasn’t the case for Owona. I was about to shake his hand but he said something really nasty. It was not cool at all. I blew my top.

Perhaps I was a little emotional but I’m also only human. You would do the same if you were in my position.

Then we were further provoked by the fans. When he headed towards the dressing room, a fan threw a bottle that almost hit Hamsani.

It was a heated affair and we were very angry. We later learnt the person who threw the bottle is close to the Negri Sembilan management. If true, we are disappointed with such conduct.

I’m tired of people constantly blaming us for the incident. My name has been smeared by many parties. I can live with that but it is unfair to the team.

Nevertheless, I have apologised to the Negri fans through my Facebook page. I also apologised on a Malay radio station days after the match.

Through you (Mailsport), I would like to offer my apologies again. I stress I bear no grudges against anybody, Owona included.

But I would like to remind all of our players – local or foreign – that there should be mutual respect between one another.

I have played with many big names, both with my previous clubs and national team. Some import players think too highly of themselves and they need a reality check.

I do not want to offend anyone and want to put this episode behind. I’m unsure if there will be disciplinary action against me by Felda United or FA of Malaysia.

Let this be a bitter lesson for us all. Enough of mocking Felda United. Let’s move forward.

We may be ‘foes’ on the pitch but once the final whistle is blown, we’re all friends.”

HD says: Let's not get too emotional shall we.
felda united football hardi jaafar negri sembilan