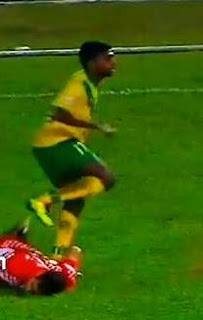 With Astro Arena now showing the matches live and a major sponsor of the Super League, it would be impossible not to get recordings of the matches. Otherwise, we can always count on youtube.

Those who watched Balotelli and Thirumurugan would be able to conclude which of the two should be severely penalised.

But then again, there is a huge difference on how football is run in England and Malaysia. Oh well.

HD says: Why this kolaveri di?