FAM League could be scrapped. 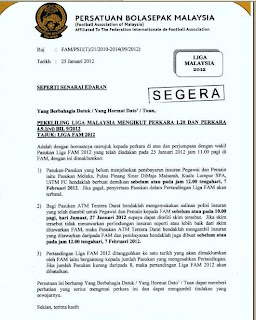 Another coach, speaking on anonymity for fear of being penalised by FAM for “speaking against policy matters”, added the insurance payment fiasco should have been addressed by the national body earlier and not at the eleventh hour. “Did the competition committee just wake up by suddenly deciding to meet the teams and asking them to pay up before the league starts hardly a week later?” he questioned. - as published in today's Mailsport.

HD says: Special meeting at 3pm on match-fixing. Let's see how that goes.