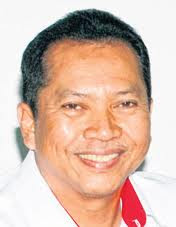 I bumped into FA of Malaysia (FAM) deputy president Annuar Musa (pic) at a hotel in PJ yesterday.

I caught Annuar as he was heading towards his red Porsche Panamera.

He had only five minutes to spare and I quickly asked him about the insurance bungle I exposed on Wednesday.

Annuar said he was "concerned" and promised to "investigate the matter" - as published in today's The Malay Mail.

He was careful with his words, not wanting to offend any party. But his facial expression could not hide his disappointment.

Annuar Musa also promised to find out why certain players were not handed their player's license although registered with the national body.

Perhaps such matters will be raised during the 'special' competitions committee meeting which the Press were only informed of yesterday.

HD says: Talking to so many people about this insurance and player's license has given me a soar throat. Or should I blame it on the durians?
Annuar Musa FA of Malaysia football