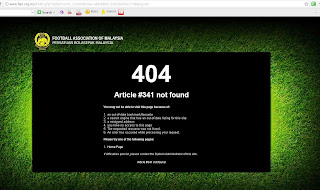 Been getting a whole lot of phone calls lately.
Quite a number of state FAs and clubs seem to have a bone to pick with the FA of Malaysia (FAM). And they are using every excuse in the book to try and undermine the national body.
The latest is the guidelines to hiring the import players.
Apparently a complaint will be lodged to why certain states - particularly Selangor and Kelantan - were allowed to "flaunt" the regulations.
This is in light to the teams hiring Lebanese players Ramez Dayoub (Selangor), Zakaria Charara and Mohammad Ghaddar (both Kelantan).
Sadly, the guideline of hiring the import players on FAM's website seems to be "missing" (pic).
Thankfully, we have another alternative website and it reads;

5. The Foreign Player to be selected should comply with the following playing status:-

- Only Foreign Players playing in Division 2 and above are allowed from the Confederations listed below:

- Only Foreign Players playing in Division 1 are allowed from the Confederations listed below:

- However, only current National Players from countries with world ranking higher than Malaysia’s ranking in FIFA’s World Ranking listed on 24 August 2011 is allowed to play in M-League 2012.

Through my interpretation, if the player does not conform to the earlier club regulations but plays for the national team higher than Malaysia, then it is fine or vice versa. That's how I look at it.

So anyone could advice if the officials kicking up a fuss has a valid grouse?