Clash of the legends 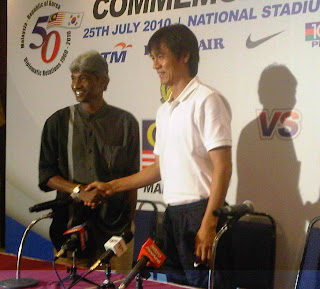 The Korean remains as one of the best sweepers that Asia has ever seen. With four World Cup appearances and having last played for MSL outfit LA Galaxy, Myung Bo has graduated from a general on the field to a master tactician on the sidelines.

He was the assistant coach to the Korean team at the 2006 World Cup.

Then there's our very own K.Rajagobal.

Having donned the national jersey and played alongside the likes of the late Mokhtar Dahari (which for the record graduated from the same primary school SRK Jalan Kuantan as I did), Rajagobal is anticipating for an exciting affair as his Under-23 lads clash with the Korean Under-23 team at the National Stadium in Bukit Jalil tomorrow (kick off at 5.30pm).

As coach, Rajagobal is best remembered for guiding the national team to winning the gold medal at the Laos SEA Games last year.

During the pre-match press conference at the National Stadium earlier, our fellow journalist were rather intrigued to learn the football culture and development methods used by the Koreans, much to the amusement of Rajagobal.

He quipped; "Finally a question on tomorrow's match" when asked by a Korean reporter.

Both sides are eager for a classic showdown and it will certainly be an interesting affair.

HD says: It could certainly turn out to be an interesting affair.