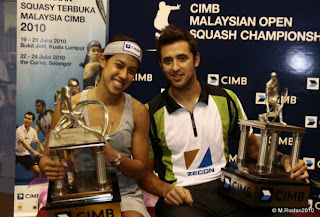 World No 1 Nicol David and Azlan Iskandar brought cheers to the home crowd after nailing the Malaysian Open Squash Championship at The Curve in Mutiara Damansara yesterday.

In her twitter page, Nicol said: "Had two monster matches in both the semis with Alison and finals with Jenny.Glad to win at the end."

Nicol was stretched after defeating England's Jenny Duncalf 11-6, 6-11, 11-7, 10-12, 11-5 in the final. Earlier, the Penangite had a nail-biting match against another English lass World No 4 Alison Waters in the semi-finals.

Azlan proved to be the most fittest player on the court and this was proven after he defeated Egyptian Tarek Momen 11-5, 11-6, 11-8 in the other final.

Congratulations to both Nicol and Azlan.

But it was my conversation with Sharon Wee which hit a note or two.

"If I were given a chance to run the show, I would want to concentrate on the 18 and 19 year olds. We all know they go through cross roads at this time of their life, wanting to either go all pro or pursue their studies.

"I have been there and I know how it feels. Some can take it, some just can't. And there must be a need to identify which talents are game on to go far so that we won't be selecting the 'wrong' players."

"It all depends if my services are need by either SRAM or NSC (laughs). But I want to end the year on a good note and only then I'll be able to give you an answer," she said, with a smile.

Pic of Azlan and Nicol taken without permission from squashsite.co.uk

HD says: I do hope the ideas suggested by the likes of Sharon and Co are taken seriously.