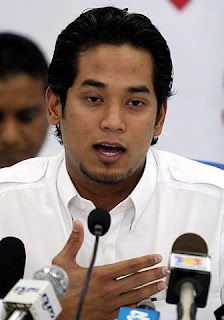 I remember speaking to Khairy Jamaluddin over talks that he was to quit his post as deputy president of FAM. This happened late last year. He read my article and claimed otherwise.

Well we now know the truth.

Khairy has not been attending the council meetings. At the Manchester United against Malaysia match last year, KJ and long time buddy Jason Lo were seated among the fans.

It's an open secret, Khairy was never loved by the folks in FAM. He came with big ambitions but was forced to submit due to the internal 'politics' of FAM - similar to that faced by his father-in-law.

Some love him, others hate him. All said and done, I believe KJ knows his football better than some of his peers - despite learning it the hard way through MyTeam.

KUALA LUMPUR, July 18 (Bernama) -- Khairy Jamaluddin today announced that he
will not be defending his post as deputy president of the Football Association
of Malaysia (FAM) for the 2010-2015 term.
Khairy, who held the post from 2007, hoped the new candidate replacing him
would be able to take a re-look at the FAM's progress as a whole, and claimed
that the FAM, as the country's football parent body, had failed to build a
strong football structure.
He said this was due to the internal problems within the FAM that led to the
withdrawal of many of the sponsors.
Speaking to reporters here today, he said there were many sponsors for the
local league previously but the private sector now preferred to sponsor
advertisements for the World Cup and the English Premier League (EPL).
"We can't blame them because the returns (from the EPL) are higher. If they
sponsor the local league, to get a few thousand supporters for one match will be
difficult," he said.
Khairy claimed that the FAM had also failed to coordinate the football
structure at the grassroots level which was also the reason why the national
team failed to get quality players for the national team.
In fact, he claimed that the FAM did not have sufficient financial resources
to develop a strong football structure at the grassroots level.
"More than 90 per cent of the FAM's financial allocation was spent to
organise the local league to the extent that the FAM could not meet its promise
to improve the country's football structure," he said.
Khairy claimed that less than 10 per cent of the FAM's financial allocation
was spent for the district league.

HD says: It was fun while it lasted bro. Hopefully we'll meet up soon. Decanter perhaps?