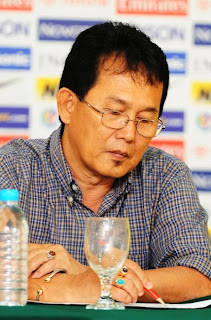 I remember when The Malay Mail was sold off by NSTP. A number of my good work mates opted for the VSS scheme. It was a sad day as some of these good folks left with a heavy heart but they got paid handsomely at the same time.

Now former journo-turned-blogger SS Dhaliwal revealed in his blog that national junior coach Azraai Khor Abdullah (pic) - or once known as Khor Lek Seng -, apparently, has been given the boot. But along with that decision comes with a 'bag load of cash'.

Perhaps it's a mutual understanding between the FA of Malaysia and Azraai. Perhaps there's more than just a golden handshake.