Move aside Paul, Mani's in town 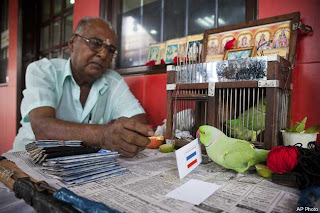 Everyone knows Paul the octopus but there's a new kid in town - meet Mani the parakeet.

Caged in Singapore's Little India, Mani got all the quarterfinals and semi finals results right. While Paul is still deciding on who to choose for the final between Spain and Holland, Mani had no problems picking Holland as the winner.

Meanwhile, Spanish president Jose Luiz Rodriguez Zapatero was quoted saying; "I am concerned for the octopus ... I am thinking of sending him a protective team."

Spanish Environment & Fisheries minister Elena Espinosa added: "On Monday, I shall be at the European Council of Ministers and I shall be asking for a [fishing] ban on Paul the octopus so the Germans do not eat him."