July 05, 2010
The 2010 World Cup semi finals in South Africa are just around the corner.
While Malaysian football fans watch their favourite teams – Germany, Spain, Uruguay and Holland – in action, here’s food for thought dedicated to our domestic scene.

Ganbare Nippon
Several Japanese officials met former FA of Malaysia secretary general Datuk Paul Mony Samuel to learn how to set up a professional league some two decades ago. The J-League was then formed in 1988. Fast forward to 2010, Japan played in the last 16 of the World Cup before losing to Paraguay 5-3 via penalties (both teams were held 0-0 after extra time).

HD says: We'd rather overpay some Mat-Salleh bloke instead of trusting the capabilities of our locals. Pemikiran masih dijajah.

Starting ‘em young
The German FA (DFB) spend millions on development, more than the English FA. The Bavarians are reaping the results as evident in major tournaments, including the World Cup.

HD says: Why can’t we spend millions developing players from Sentul or Taiping instead of heading all the way to Everton? The English side were pathetic in the World Cup.

Say no to racism
The fresh German team is vibrant and colourful – thanks to its ethnic diversity. From Polish terrors Lukas Podolski and Miroslav Klose, third generation Turkish decendant Mezut Ozil (pic) to Sami Khedira of Tunisian background – all playing for only one nation Deustschland!

HD says: 53 years of Merdeka and we still sing the racial song. Sigh! 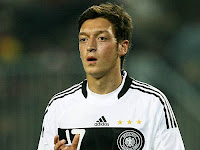 HD says: What about the FA of Malaysia? Double sigh!

Slumdog Millionaires
India may not be playing in the World Cup but their national team are currently preparing for the Asian Games come November. Former MyTeam striker Stanley Bernard, who enjoyed playing in the I-League last year, explained that major Indian companies support the clubs and players are paid on time.

HD says: Apparently MyTeam players are still waiting for their wages to be paid despite the club quitting the scene last season! Triple sigh!