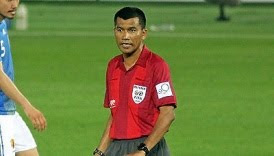 Dozens of articles were written about our very own Subkhiddin Salleh's (pic) appointment as a referee to the 2010 World Cup in South Africa.

Many kept their eyes glued to the tv, hoping to see some form of Malaysian representation on the pitch through the Penang school teacher.

Nevertheless, that never happened as despite being appointed referee, Subkhidin was only the fourth official in seven matches.

And now there's talk of conspiracy in the selection board of the referee's committee at the World Cup - as published in today's The Malay Mail.

Subkhidin does not want to talk about it, but those close to him acknowledge something fishy is going on in South Africa.

HD says: It's always about money.