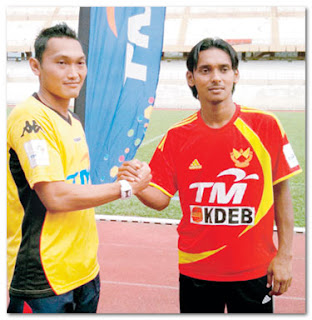 This was twitted by The Malay Mail's Pearl Lee some 15 hours ago. I presume she was watching the Kelantan-KL Super League match which was aired live from the KL Stadium in Cheras.

Usually the league is sponsored by a particular party while the participating teams are free to scout for their own sponsors. Simple example, financial giants Barclays sponsor the English Premier League while the teams have various other names blazed on their jerseys.

In the M-League it's all Telekom Malaysia. From the A-board to the front of the jerseys. And if you have a sponsor, you have to share the front spot and make sure the sponsors' logo is not bigger than that of TM. Money talk aside, it just makes the jersey look fugly.

HD says: A little bird told me that the FA of Malaysia and TM will renew their contracts at the end of the year. If so, please look into the details and make sure the end result provides a win-win situation for both parties.