A 'monument' for Tony. 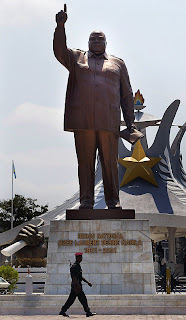 I am tired of highlighting the constant mismanagement and internal bickering in Malaysian sports. I am tired of arguing and fighting.

Thus, while having lunch with a mutual friend, we spoke about our old friends including Mailsports’ former sports editor Tony Mariadass.

Friend; “Someone told me Tony has left his job in India and he's back in Malaysia”

HD; “Well wasn’t this written on his blog sometime ago? But I doubt he's back”

HD: Obviously-lah. Perhaps he is still serving the remaining bit of his contract. Or maybe he’s waiting for the full payment from the Indian officials. Who knows if he comes back without his salary, they (officials) will use what is owed to him to do repair works on the stadiums (laughs).

Friend: “Or better still erect a wall with his name written on it. Or build a mini monument for him!” (bursts into laughter)

Just joking sir, but it made me think of the time when folks like you were manning the desk. There were lots of energy - good and bad - but it somehow made the desk alive.

I don’t know if it’s the same today.

And the crooked officials (mere puppets in my eyes) who are warming their seats by being arrogant and playing Almighty are not helping either.

And what I have learnt, those who stick to their guns are left behind while those who lick a$$ and play politics seem to enjoy life.

HD says: Life’s too short to get all worked up. Well Tony, we’ll surely meet up for banana leaf once you get back. Cheers!