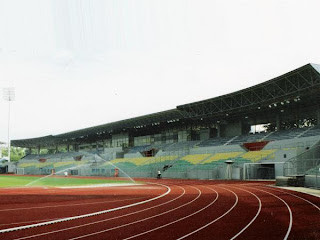 Finally, Sports Minister Datuk Ahmad Shabery Cheek said something that I can agree to.

It has been stressed countless times that there is a serious need to build stadiums catering for football.

Instead the stadiums in our country are mostly too big and caters for a whole lot of things, from celebrating a certain anniversary, staging concerts to turning into a political rally hub.

Thus I must say that although the Shah Alam Stadium and the National Stadium in Bukit Jalil look majestic, I still prefer the Cheras Stadium (pic) and the Selayang Stadium.

So Shabery said the right thing by stating that the government is studying a proposal to build stadiums specifically for football.

But let's take it a step further.

If the government is tasked to construct such stadiums, they will naturally fall under the state governments' jurisdiction. Why not have a 'loan' system whereby the stadiums are leased or handed to the state FAs so that it will only be used for football and nothing else?

HD says: Selangor may end the season with the Super League title but despite their rich tradition they don't even have their own stadium (Shah Alam Stadium owned by Shah Alam Municipal Council), let alone a training ground (state government owned SUK Field, Shah Alam). That itself speaks a lot about Malaysian football.