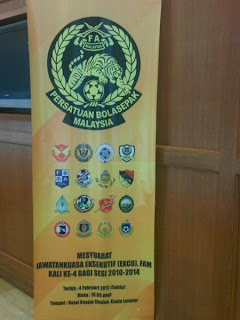 ...but why only announce now?
The FA of Malaysia's (FAM) 4th exco meeting - their fourth sitting since 2010 - met yesterday and spoke on wide range of issues over four hours.
After the meeting, a Press Conference was held. And it was only after a question by NST's Devinder Singh that FAM revealed 18 players from three President's Cup teams (Negri Sembilan, T-Team and MP Muar) were slapped with bans from two to five years.
Rewind to last year, several bookies - two being backroom staff of several President's Cup teams - were arrested and charged in court for match-fixing.
Read the story here.
The exco members also decided to be more open when it comes to criticism and looked at organising road shows to attract more fans to the stadium.
HD says: ......
FA of Malaysia football match-fixing