FAM: It is his choice. 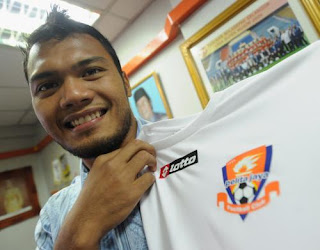 UPDATE (Feb 4): AFC held a Media get-together at Bangsar Shopping Centre yesterday. AFC gen sec Alex Soosay said;
The player has signed a contract with the club and there are legal implications there. All the players, clubs and the national body are at a high risk of being suspended. Fifa will take very strong action and is liable to impose sanctions if the PSSI does not bring the rebel league under its control.

Nevertheless, Safee went on to sign another two-year deal with Pelita Jaya FC valued more than RM2 million - despite the possibility of him not being able to play for the country.

Read FAM: It's his choice.

A little bird told me that Safee could escape the mess nevertheless and still enjoy the big bucks.

The Asian Football Confederation (AFC) are expected to meet the Media in Bangsar (at 3pm) today and are prepared for the questions about Safee. Apparently, the ISL clubs will be deemed illegal but not the players.