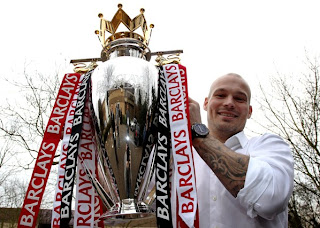 Just got off the phone with former Arsenal player Freddie Ljungberg. I was only given eight minutes as we spoke about Arsenal's current "embarrassing" situation and the match against Tottenham Hotspur.

More of Ljunberg's take on the match will be revealed during the Thank Friday It's Football on BFM radio (89.9 FM) from 7.30pm-8.30pm.

Well, here's hoping to spend more time with Freddie, maybe over some nasi lemak or roti canai, if and when he visits KL in the near future.

The previous two Barclays surveys in 2005 and 2008 gathered the views of over 60,000 fans to find out how the Barclays Premier League is consumed worldwide. In 2012, the football landscape has changed dramatically and the survey will look to find out how social media has allowed supporters to get closer than ever to their favourite clubs. It will also question fans on a range of topics including viewing habits and traditions, their favourite Barclays Premier League managers and players, and predictions for the league over the next five years.

Former Sweden and Arsenal legend, and Barclays ambassador, Freddie Ljungberg, said: “The Barclays Global Fans Survey is a really positive way for fans to express their views and passion for the most popular domestic football league in the world. From my experience of playing around the world, fans of the Barclays Premier League are the most enthusiastic fans of any competition and love their football. The Barclays Global Fans survey turns the spotlight on to these supporters, and I’m looking forward to hearing what they have to say.”

Fans who take part in the survey will be entered into a prize draw to win an all expenses paid VIP trip to watch their favourite Barclays Premier League club play live, including flights to the UK if they live overseas, accommodation and spending money.

To complete the survey, fans should visit: www.barclaysfootball.com

Barclays will release the results in mid-April, when the Barclays Global Fans Survey is published.