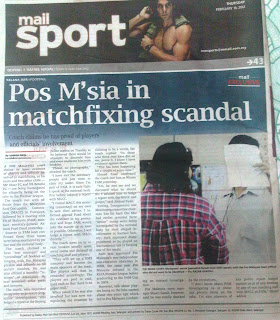 A Pos Malaysia coach visited the Malaysian Anti-Corruption Commission in Putrajaya yesterday morning followed by a meeting with FAM assistant secretary general Ahmad Fuad Daud at FAM in the evening. He has lodged a police report in Sepang a day earlier.
I confronted the coach at Wisma FAM and he spilled the beans, claiming to have "evidence" on those involved in match-fixing.
After much persuasion, he admitted to having text messages and recordings as prove of football bribery but did not want to show or reveal further.
When I asked if he is also involved but is now trying to cry victim, the coach smiled and said;
"I challenge them to provide dirt on me but I know I have evidence against them."
Pos Malaysia, NS Betaria and MP Muar are the three SENIOR teams that are currently being investigated by the Police and the FA of Malaysia (FAM). Even the Crown Prince of Johor, who will be officially named the Johor FA president today, revealed the same on his twitter page.
Read more in today's Mailsport.
HD says: This is only the beginning.
football mp muar ns betaria pos malaysia