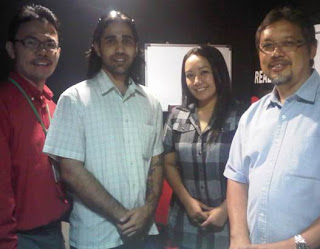 It used to be known as 'Kerusi Panas'.
Now, Bernama's Radio 24 (93.3FM) calls it 'Dalam Radar' that airs from Monday to Friday from 6.33pm - 7.30pm.
Former shuttler Razif Sidek and I were invited to speak about the development of badminton in Malaysia, if the BA of Malaysia (BAM) feels 'threatened' by clubs and the situation of badminton in the country.
Producer Markus Lim tried to get someone from BAM on the show but they apparently declined.
Quite a number of listeners called in. Some asked us questions, a handful wanted to have their say.
Some even brought up the statement by BAM secretary Ng Chin Chai who was reported saying the "priority is the Olympics and not the Thomas Cup" as published here.
(Note: BAM deputy president Al Amin Majid diffused the situation during the launch of the Axiata Cup by saying both Thomas Cup and Olympics are a priority and he is open to players from clubs to represent Malaysia in the Axiata Cup as reported here.)
I stressed while we may have a world No 1 in the form of Lee Chong Wei, we have not progressed in the form of winning titles and building more academies. In fact there should be more clubs in this day of age.
Razif and I wished we had more time as there was certainly so much more to debate about. But it was good while it lasted.
Special mention to Markus (pic: far left) for inviting me to the show, host Wan Syahrina Wan Ab Rahman - winner of the Seri Angkasa Best Radio News presenter 2010 (pic: third from left) - and the whole lot of the Radio 24 crew who were a jolly bunch.
HD says: Till we meet again.
badminton bernama radio 24 razif sidek