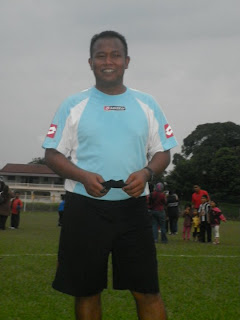 Those were the words of former Negri Sembilan President's Cup coach Yusarman Yusof (pic) who I managed to contact yesterday.

Yusarman, who turned 36 last month, was handed a life ban by the FA of Malaysia's Disciplinary Board (DB) during their investigations at Royale Bintang Seremban on Nov 24 and 25, 2011.

Yusarman was said to have frequented a karaoke lounge at Dataran Senawang with 11 of his President's Cup players on two occasions to meet two unidentified men. The players apparently received RM300 on their first meeting and were later handed RM2000 in their second meeting.

Read all about Yusarman on page 3 of The Malay Mail.

By the way, it is 11 players from Negeri Sembilan and not six as informed earlier. Read more here.
HD says: Apparently Negri Sembilan FA - for all their good work in unearthing this match-fixing fiasco - were instructed to pay for the cost of the meetings in Seremban said to be more than RM4,000.
football match fixing negri sembilan president's cup