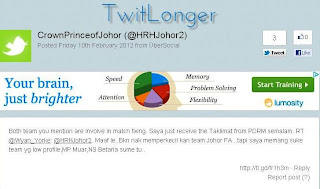 I received a phone call from a man who identified himself as Alias and claims to be the lawyer for both Rajendran Kurusamy (who was charged for match-fixing last year) and MP Muar FC.
As I told him and I would like to stress once again - a spokesman from the FA of Malaysia (FAM) confirmed Pos Malaysia, NS Betaria and MP Muar FC are being investigated for elements of match-fixing.
Also, Tunku Ismail Idris - the Crown Prince of Johor who was just named Johor FA president - revealed MP Muar FC and NS Betaria are monitored by the Police (as per his tweet on Feb 10, 2012 -pic).
I managed to obtain comments from officials of NS Betaria and MP Muar FC and they expressed shock - as seen in today's Mailsport.
HD says: Oh well...just another day in office :)
match fixing mp muar fc ns betaria pos malaysia