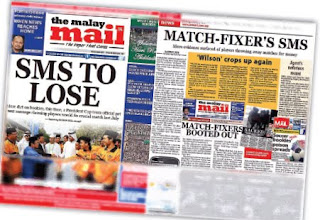 In 2010, I wrote about President's Cup players, including from T-Team, being on the take (pic).
Today, 11 players and five officials from that T-Team squad are being investigated by the FA of Malaysia's (FAM) disciplinary board.

All 31 are temporarily suspended from football activities until the DB meets and discusses about any possible action.

As said on Awani Ekstra last night, I am baffled to why the responsible party is only taking action now despite T-Team having lodged a report coupled with my stories on the match-fixing fiasco surfaced two years ago. But I added, "better late than never".

Read The match-fixing scandal widens on FAM's current investigation and When and how it all happened for a recap of my story in 2010.

HD says: I believe more will be named and shamed.