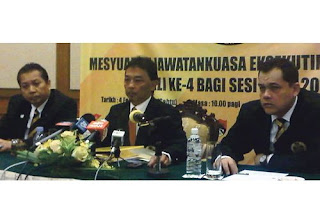 IT was their fourth meeting since 2010. Naturally, the FA of Malaysia (FAM) Exco took over four hours to discuss various matters — from management to matchfixing.
The meeting was chaired by FAM deputy-president Tengku Abdullah Shah. The Exco is supposed to meet four times a year.It was Tengku Abdullah who wanted the Exco meetings, even informally once a month.Those who sat through the meetings could sense a wind of change. It was obvious Tengku Abdullah had taken over the reins from the president, Sultan Ahmad Shah, who is also his father.“It is clear he wants to clear the deadwood in FAM. He only wants to work with sincere members,” said an Exco member who declined to be named.This include introducing radical changes by 2022 with reforms in the national teams and leagues.Read more here.
Some of the other matters Tengku Abdullah spoke about;
On Tengku Ismail Sultan Ibrahim announcing on twitter he was the new Johor FA president and that FAM was not aware of his “appointment”:
“It’s good and we welcome him.”(Azzudin stressed “FAM were not informed of Tengku Ismail’s appointment in writing” but was quick to add “Johor FA are in the midst of conducting their congress to conduct the election”.)
HD says: Hmm..