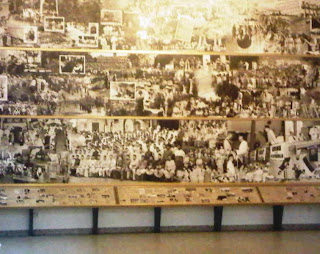 I remember writing an extensive article on PNB developing Stadium Merdeka and the area surrounding it in 2009.
This idea then was to stage football matches including Merdeka Tournament there.
It's been three years and all we see now are just concerts hosted by the stadium.
I must say the restoration work done on the stadium was excellent. From the huge historical pictures (left) and write ups about the stadium at the entrance to the mosaic floors which reminds one of the 60s, the stadium was certainly warm and managed to give one the nostalgic feeling.
Now it is hoped the stadium authorities would actually allow football matches to be played at the stadium - playing at 4.15pm on a Saturday would be perfect as it is easily accessible for the fans - young and old.
It is not easy finding a football field in the heart of KL.
I'm sure many of you wouldn't mind sitting on the concrete slabs watching a good match. I know I wouldn't.
Perhaps the state FAs or FA of Malaysia (FAM) could approach PNB to discuss the possibility of organising matches for the coming season...if not for this year's Malaysia Cup. All one has to do is ask....
HD says: Let's have football matches there.
football pnb stadium merdeka