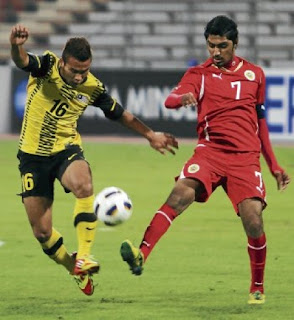 “I might even change our playing style. We need to limit our passing in our half. If we keep on repeating the same thing, it will be of no use."
Those were the words of Harimau Muda A coach Ong Kim Swee when contacted in Manama about an hour after the match.
More will be published once The Malay Mail's website is updated.
Kim Swee is adamant of making changes to ensure the team will not repeat the same mistakes for the third time.
The national side lost 2-1 to Bahrain in the London Olympic qualifier - their second defeat to the Middle Eastern team. In November, the Harimau lads wasted a 2-0 lead to lose 3-2 to Bahrain.
Some claim the Malaysians looked rusty, perhaps because they have not played any competitive matches for quite sometime.
Others say the players lacked concentration and made life difficult for themselves.
Kim Swee was at the sidelines that night and should know his boys best. One thing for sure, he is right to say that changes need to done - and they better be done soon before the rot gets even worse.
HD says: It's going to be another long day....
football harimau muda A olympic qualifier Ong Kim Swee