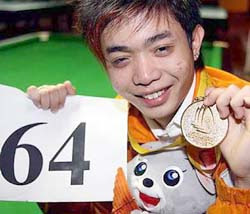 If it is let's say athletics, especially concerning the Malaysian Athletic Union, you get a whole lot of people jumping on the bandwagon and making a lot of noise.

But when it comes to the Malaysian Snooker and Billiards Federation - not a single squeak.

Yet, you get high ranking officials hugging and shedding tears when our cue artists win a gold medal. I was at the 2007 Korat Sea Games when Moh Keen Ho won the 64th gold medal for the nation. I saw the 'love' showered upon Keen Hoo there.

Today MSBF is still in a messed up situation - so messed up that even the players are unsure what their counterparts are doing. Most are working in snooker centers. Others have left the scene completely.

And yet we get a bunch of snooker pretenders - who don't even know which coloured ball is supposed to be potted in first - writing slanderous letters and addressing the letters to even the Sports Minister.